2-6 player card game that satirizes corporate greed and white-collar criminals. Can be played in teams of 2 as well.

As a crooked CEO of a phony multi-national corporation, your mission in Fraud is to collect and bank Asset and Liability Cards in your Offshore Account, play Fraud Cards to attack your opponents, use Defense Cards to fend off attacks and avoid collecting Indictments. Once a player receives their 2nd indictment, they have to do the “Perp Walk” around the table while other players heckle them. The player who first banks $150 million ($150M) in Assets in their Offshore Account before receiving their 3rd indictment – wins the game.

Each card features unique, hand-drawn caricatures and art by Rick Parker. Rick’s probably best known as the artist of MTV’s Beavis and Butt-Head Comic Book, and was on the staff at Marvel Comics for many years. Rick was the perfect man for job – supremely talented comic artist, and a really shady character.

Each player selects a CEO business card as their identity and gets a score pad to keep track of banked Assets and Liabilities in their Offshore Account ($150M wins the game) and indictments (3 strikes and you’re out).

In any given turn, a player has 1 of 5 options:

Fraud has been thoroughly play-tested, improved and refined over 10 years from initial beta launch in 2010 until this final game release. Fraud uses some of the similar game mechanics of Mille Bornes, the attacking, defending style card game that is listed in the GAMES Magazine Hall of Fame. Fraud is fun, simple to learn, and takes only 30 minutes to play. The game combines strategy and luck and satirizes corporate greed and white-collar crime.

—description from the publisher

No votes yet.
Please wait...

Permanent link to this article: http://www.boardtodeath.tv/fraud-card-game-preview-video/ 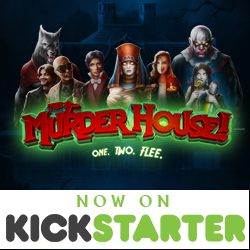